skip to main | skip to sidebar

Now this is news. Monetary policy makers at the Ceska Narodni Banka (the CRs central bank) cut what is the European Union's lowest key interest rate to 3.5 percent at today's meeting. This was the first decrease in more than three years, and was evidently an attempt to counter the koruna's record appreciation in order to try to revive economic growth which is fading rapidly. 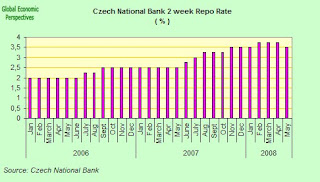 Rate setters seem to have decisively switched their focus from the current high levels of inflation to countering the koruna's 13-month rally on concern a high Koruna will continue to have a negative impact on exports, investments and employment. Central Bank Chief Zdenek Tuma warned last month that the koruna's recent advance could cause inflation to undershoot the central bank's 3 percent target next year, justifying the then hypothetical possibility of rate cuts. Since then, the koruna has lost 4.1 percent against the euro. 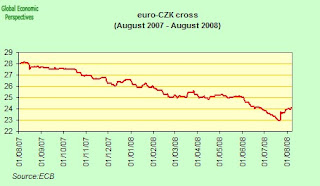 The central bank lowered its forecast for economic growth for this year to 4.1 percent from the previous 4.7 percent outlook. In 2009, economic growth the bank expect growth to decelerate further - to 3.6 percent - which compares with the 6.6 percent rate achieved in 2007. So the bank is worried that the economy is slowing excessively quickly.


In fact the Czech economy expanded at the slowest pace in more than three years in the first quarter as consumer spending weakened. Gross domestic product rose 5.3 percent, compared with a revised 6.3 percent in the previous quarter. The economy's rate of expansion slowed for a third consecutive quarter after peaking at a record 6.8 percent in Q2 2006. 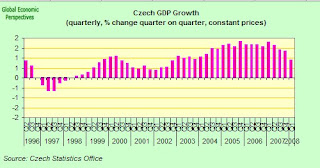 If we look at the q-o-q chart we can see the slowdown even more closely. Basically the economy hit a quarterly 1.8% in Q1 2007, and since that time it has been slowing to Q1s 0.9% (or an annual rate of 3.6%). Clearly Q2 will be weaker and we could see q-o-q of 0.5%, which mean if the rate of de-celleration continued we might get negative growth in Q4. This would clearly be a soft landing, but it is preoccupying for an emerging economy nonetheless. 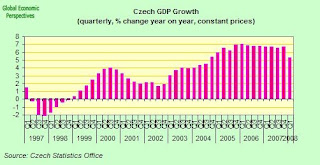 The inflation rate increased to 6.9 percent in July from June's 6.7 percent, surpassing the central bank's goal for the 10th consecutive month. The CR now has negative interest rates of some 3.4 percent. That is, monetary conditions in the CR are extremely accommodative. 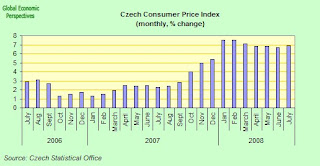 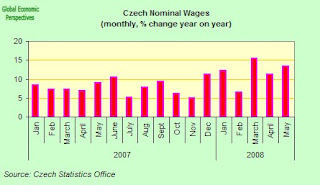 Which is not really surprising, since the labour market has been steadily tightening as the number of unemployed has dropped steadily. Which makes the issue of why consumption has been falling back much more of a mystery. This situation is very different from what we are seeing at present in Bulgaria or Romania, or even Slovakia. 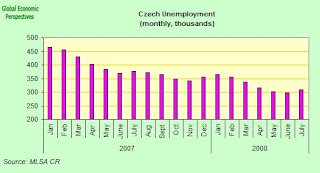 Now it is not hard given the sharp rise in the Koruna to understand why Czech exports slowed significantly on a year on year basis in June. They were up a touch on May, but down on April and February, and were only very slightly up y-o-y. Exports rose an annual 1.7 percent, to 215.8 billion koruna and imports totaled 201.9 billion koruna, a 1.1 percent decline in the year. 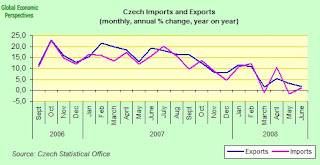 But why is consumer demand slowing at this point? This is much harder to understand, yet it is. Why are people not simply borrowing cheap money and building houses and buying cars? Seasonally adjusted retail sales, however, only grew at a very moderate rate in May (up by 0.6% month-on-month and by 2.5% year-on-year). 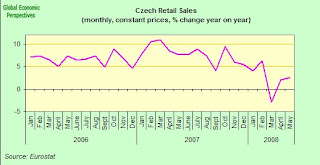 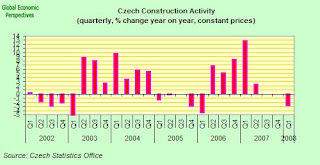 Now this is all frankly rather worrying, and it is doubly worrying for me, because I think I have seen this before in Portugal and in Hungary. The rising Koruna may well choke exports but there is no reason whatsoever why it should be choking domestic demand, indeed quite the contrary. So why is domestic demand so weak, that is the question?

If we look at a longer term chart for year on year household consumption growth, we will see that the last "long wave" of this peaked in Q1 2007. We can expect the performance in Q2 2008 to be even worse, and the question, the quite deep theoretical question really, is why this should be happening? 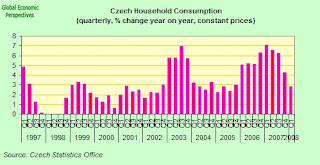 Now here's a rather similar chart for Hungary. As we can see, Hungary had it last local peak in Q1 2006. 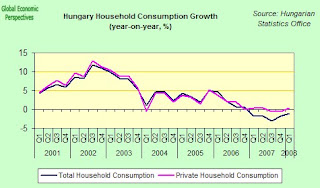 And as we can see, Portugal's last big "wave" ended in Q1 1999. So my question is really, is it possible that the CR is now where Portugal was in Q1 1999 and where Hungary was in Q1 2006? My feeling is that it is possible, and indeed this is where we may well now be. The thing is we need to understand the theory which explains the dynamics behind all this much better. But if it isn't like this, then I don't understand why consumption is now simply fading out. 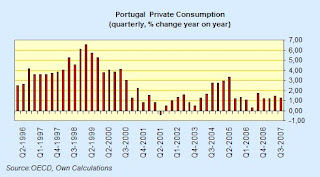 Basically one thing that these three countries have in common is declining population (or at least in the Portuguese case declining population at the time when consumption blew, as a result of prior EU freedom of movement related out-migration). Declining and ageing population. As we can see in the first chart, the population of the CR has declined in a variety of ways since the late 1980s. It has started to increase again since 2004, but it seems to me the consumption bust was already in the pipeline by that point. What is really, really surprising to me is just how sensitive the whole system is to what appear to be really quite small movements in population size. 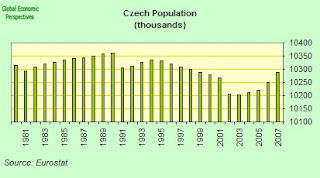 Of course it isn't simply the size that matters, it is more the structure, and as we can see from the median age chart below the CR has been ageing quite rapidly for some time now, and will continue to age as we move forward. Having more children and accepting more immigrants (both of which are very advisable) are the only things which will slow all this down. 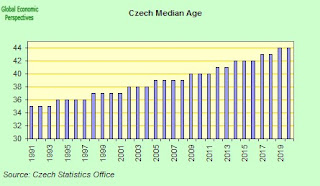 Of course you won't read about any of this in the economics text books (yet), but the picture is reasonably clear, and it is also perfectly compatible with life cycle savings and consumption model as presented by Franco Modigliani. You simply need to apply it to population rather than simply to individuals.

I like what you say and to add to that:- The results in the elections indicate that even in good times the communist party got 20% of the vote. Most I feel were votes from the ageing population with diminshing incomes.. and a small minority of younger voters. If you were to overlay the map of history onto Hungary, Portugal and CR the population dynamics of the masses may well corralate with the masses suspicious of borrowing and consequently the economies contracting. Contrary to a declining birthrate there has been a recent babyboom in the CR. All the more puzzling that basic necessities have tanked YOY. Driven by outside investment the CR economy has in fact got ahead of itself and needs to re-balance. The CR central bank will have to keep cutting interest rates to rebalance the Koruna. Even then inflation will be minimal. The fact is simple :- The masses have little or no money and have little desire to borrow. The danger is that it becomes the future centre for the carry trade. Mmmmmm a dangerous game . But what option does the CR have?

Thanks. I would want to empahsise that I haven't got all this honed down yet by any means. I am just looking at similaritities, and asking myself why some countries have one pattern, and some another.

The FT had this yesterday on the French trade deficit:

For the last five years, the French economy has instead been dependent on domestic demand and construction. The model is the mirror image of the German economy, whose strong performance until recently has been driven by exports. Since the French economy is less dependent on exports than Germany, it could be less affected by a global slowdown.

Now I am sure there are many reasons for these differences, the FT itself lists this one:

However, it points to the underlying problem of the lack of competitiveness of French companies, not just in terms of price but also because of a lack of innovation in their products, according to a recent report from HSBC. Although the deterioration in the deficit can be partly explained by the soaring price of energy imports and the rise in the euro, French manufacturing businesses have also lost market share inside the eurozone.

So competitiveness is an issue. But demography may well also be one, I mean Germany is a lot older than France (on average) and the French have - like the US - near replacement levels of children while Germany has had nearly 30 years of very low fertility.

House prices in Germany have hardly budged - on average - since the mid 1990s.

And really I have quite a positive impression of the CR in comparison with the EU 10 on average. I think - like in Hungary - some of the export industries here are very competitive - despite the strong Krona - but this competitiveness is now being eroded by both currency appreciation and higher wages as the labour market tightens.

(Incidentally, I have added a couple of charts to the post on this)

"The danger is that it becomes the future centre for the carry trade. Mmmmmm a dangerous game."

So basically yes, the CR needs to let the koruna fall somewhat I think, and concentrate on exports, and open up more - they have made a good start, possibly the best in the EU10 - to migrants to take the pressure of the labour market in the short term.

Re immigration:
As an expat (well, sort of), me and my partner (expat too) were looking at going back. Given the value of my savings dropped by 25% in CZK value in the last year, I'm not that keen now though.

Not to mention I'm not sure how many employers in CZ could use a structurer (or whatever it is I'm doing these days :))

My Book On Spain 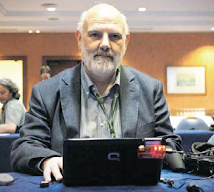 Links, Comments, Debate and Much, Much More

How Near Is The Czech Economy To Recession?
Ceska Narodni Banka Drops Its Interest Rate
Inflation-Free Growth Capacity In The Czech Republic

Edward 'the bonobo' is a Catalan economist of British extraction based in Barcelona. By inclination he is a macro economist, but his obsession with trying to understand the economic impact of demographic changes has often taken him far from home, off and away from the more tranquil and placid pastures of the dismal science, into the bracken and thicket of demography, anthropology, biology, sociology and systems theory. All of which has lead him to ask himself whether Thomas Wolfe was not in fact right when he asserted that the fact of the matter is "you can never go home again".

He is currently working on a book with the provisional working title "Ageing, Fertility and Global Imbalances".

Apart from his participation in A Fistful of Euros, Edward also writes regularly for the demography blog Demography Matters. He also contributes to the Indian Economy blog . His personal weblog is Bonobo Land . Edward's website can be found at EdwardHugh.net.